Polish Tantal AK74 Rifle-M13 Industries, 5.45 x 39 semi-auto.  We were able to locate a small Cache of Polish Tantal kits to have these rifles built by M-13 Industries.They feature original Polish Tantal AK-74 parts kit and just enough US made parts to make it 922-R compliant. The classic rifle has the look and feel of the Original with the Wire side folder stock and ambi Safety. This has a classic surplus hand guard stock set.  A US 4150 Nitride treated barrel is installed on the rifle and all metal surfaces have a quality Black Duracoat finish. Please Note: Hand guards are Military Original Surplus and will show usage/ character colors may vary from set to set. Backed up by a 1 year warranty.

Brief History
Design work on this rifle officially began in 1984 at the government-owned Ośrodek Badawczo-Rozwojowy (OBR) in the city of Radom at the request of the Polish Ministry of Defense (the OBR institute had already been studying a possible 5.45mm weapon platform since late 1980).  In 1985, the weapon’s parameters were confirmed and factory tests were conducted by the end of that year.  In 1986 the first batch of prototypes was fabricated for evaluation and qualification testing.

These early prototypes, initially designated wz. 1981, were modeled on the Soviet 5.45mm AK-74 assault rifle and emphasized a high degree of parts commonality with the AKM rifle.  As the weapon was intended to be able to launch rifle grenades, a newly designed, multi-functional muzzle device and a sturdier folding shoulder stock were used (the wire stock is a copy of the wire stock used on the East German MPi-KMS-72rifle). Polish tantal ak74 rifle-m13 industries for sale

By the end of 1987 the rifle was extensively overhauled and improved (among the changes made, a series of components were introduced that were meant to be interchangeable with the AK-74, including the bolt carrier, bolt, magazines and the burst fire mode was further refined).  In January 1988, these product improved prototypes were again evaluated, and in 1989 the rifle was declared to have met its requirements, followed by an order for a pre-production batch, which was manufactured that same year. In 1990 the rifles were successfully evaluated and then transferred for final operational testing. In 1991 the rifle was introduced into service with the Polish Army as the 5,45 mm karabinek wz. 1988 (kbk wz. 88). Buy polish tantal ak74 rifle-m13 industries

There are no reviews yet. 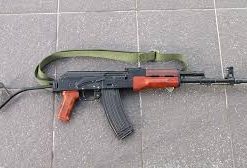